The Gujarat forest department has recovered the dead body of a young male lion in Junagadh district, adjacent to Gir forests, taking the death toll in the state to 24.

The forest department confirmed that the corpse of the dead lion was found on a farm land, which falls under the Revenue Department of the state government - in Kalavad village under Visbadar Taluka of Junagadh.

"Prime facie the death seemed to be natural. The body of the around 2 to 3-year-old male was recovered in the afternoon of October 13 from Nilgiri farm and was sent for Postmortem in Sasan animal care center of Gir Somnath. The report is still awaited," DCF Gir-West Dhiraj Mittal told UNI.

By the beginning of October, a total of 23 lions had died in just 20 days. The deaths were attributed, after initial denials, to an outbreak of canine distemper virus (CDV) and tick-borne babesiosis.

In this case, officials maintained, "There doesn't appear to be any signs that this was a death due to disease. However since the corpse had partly decomposed by the time we found it, the post mortem is necessary to be absolutely certain."

Officials admitted that the fact that the young lion was found outside the protected forest area wasn't surprising, adding that the situation increased the potential risks that could have proved fatal for the lion.

As per a CAG report that was tabled earlier this year in the Gujarat Assembly, more than half of the species live outside the protected area.

This constantly brings them into conflict with humans, leading to deaths from factors ranging from speeding vehicles, trains, open wells, live wires and retaliatory killings by farmers.

When young male lions reach sexual maturity, they leave their pride in order to form their own. However in Gir - where the species is bottle-necked in a mere 1,621 square kilometer area - these young males often don't fare well, admitted officials.

In this case, the lion carcass was found after farmers were alerted by a foul smell. A source in the forest department said, "It is impossible to rule out the possibility that the lion was killed in a case of conflict with humans." 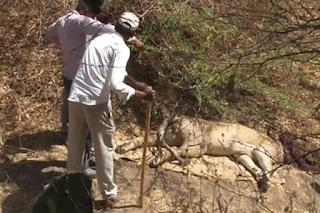 Posted by Kishore Kotecha at 1:00 PM