WHILE THERE has been no report of any lion death due to disease in the last 20 days, 36 Asiatic lions that were rescued after a spate of deaths in Dalkhaniya range last month are still under observation. Forest officers said they have not decided on any timeframe to release them back into the wild.

After the multiple deaths, the forest department launched an extensive drive to screen each lion in Gir forest and other protected areas from September 23. During the drive, which covered 3,000 sq km, a lioness in Sarasiya Vidi was found to be ill and died before she could be treated. Another lion cub that was shifted to a rescue centre also died

"They are all well," Dushyant Vasavada, Chief Conservator of Forests (CCF) of Junagadh wildlife circle, told The Indian Express on Friday when asked about the 36 lions under observation.

Ravi Chellam, a wildlife biologist, said that keeping wild lions in captivity for long periods is risky. "Since lions are territorial animals, they mark their territories on a daily basis by roaring and scent marking. If territories are not marked, other lions will recognise that the territory is vacant… Some other lions will take over the territory without any challenge… This will significantly reduce the chances of the captured lions surviving after being released." he said.

He also advocated eliminating potential sources of disease rather than rescuing lions and treating them in captivity. "The problem is our approach to dealing with wild animals as if they are semi-captive, rescuing them at will. We shouldn't treat wild animals in that way. What we should do is prevent poaching, lions falling into wells, being run over by trucks and trains," Chellam said, adding that regular disease monitoring and ring-vaccination of domestic animals is important. 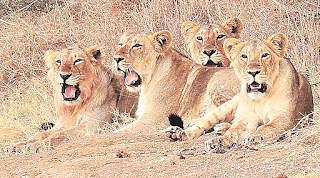 Posted by Kishore Kotecha at 5:55 PM