Lioness Rescued After Falling Into A Well In Gir, Suffers Minor Injuries

Lioness Rescued After Falling Into A Well In Gir, Suffers Minor Injuries

AHMEDABAD: A lioness today suffered minor injuries after it fell into an open well in Gujarat's Gir forest, a senior official said.

The incident comes just a few days after the Gujarat government told the High Court that it was making efforts to cover open wells in the Gir forest to prevent animals from falling in.

"Our team reached the spot and rescued the lioness after it fell into an open well. She has been shifted to our rescue centre and is being treated for minor injuries," Vasavada informed.

On the issue of building parapet walls on open wells in Gir forest for the safety of lions, the state government earlier this month told Gujarat High Court that out of a total of 50,517 open wells, 17,008 remain to be enclosed.

In an affidavit filed on the issue, it told HC that a subsidy assistance of Rs. 16,000 per well would be provided.

The state has witnessed the deaths of 23 lions in the Gir forest within a span of three weeks in September.

The Gujarat government had told HC that as per the postmortem report, 17 of these 23 lions died from bacterial and viral infection leading to respiratory and hepatic failure.

Three others died due to infighting and cause of death of the remaining three could not be ascertained, the government's affidavit stated. 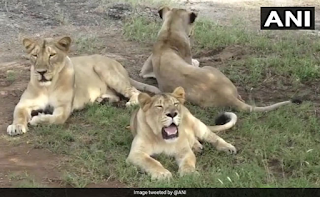 Posted by Kishore Kotecha at 1:30 PM