Sasan Gir: So what exactly killed the 23 lions of Gir National Park in Gujarat? A hapless forest department, now reduced to clutching straws in the wind, doesn't have any concrete answer. Till Saturday, Canine Distemper Virus (CDV) was held as culprit no. 1, but it only accounted for four out of the 23 deaths. What about the rest? Now it's being claimed by the department that 10 lions died of tick borne babesiosis.

The babesiosis-infection claim only makes the official position more untenable. Officials and lion experts the reporters interacted with are surprised over the failure to pinpoint the exact cause behind the deaths.

To add further to the confusion, another theory behind the 23 deaths has started making the rounds, one which the forest officials neither confirm nor deny. This, if proved, could well account for all the 23 deaths.

According to this theory, which interestingly the Chief Conservator of Forests (Wildlife Circle, Junagarh), DT Vasavada, does not rule out, a dead buffalo carrying the deadly babesiosis protozoa could have transmitted the disease to a pride of lions after they consumed the carcass.

A section of forest staff of Gir is already talking in a hushed tone about a dead and partly eaten buffalo found in the Dalkhaniya range of the national park about a month ago. All the fatalities have occurred in this range; and equally significant is the fact that the lions started dying or falling sick with days of the carcass' discovery.

When asked about this, Vasavada said he was "aware" of this talk about the dead buffalo eaten by the lions of Dalkhaniya range. Pressed further, he said, "At the moment, I will say neither yes nor no to this hypothesis. People are talking all kind of things. But yes, we are studying this aspect too."

It does seem likely that a huge smoke-screen is being created around the death of lions, so that no single conclusion could be drawn about. The old and often-tried 'if you can't convince them, confuse them' dictum could well be at play here. Consider this: the post-mortem of lions and other related tests are being conducted by five different institutes: Veterinary College (Junagarh), National Institute of Virology (Pune), Forensic Science Laboratory (Junagarh), Gujarat Biotechnology Research Centre (Gandhinagar), and Indian Veterinary Research Institute (Bareilly). Beside, the Gujarat forest department has also reached out to a number of big cat experts and zoos across the country.

Another Gujarat-based senior forest official who did not want to be quoted said the departments' zeal to "leave no stone unturned" was also adding to the overall confusion, a feeling of too many cooks in the kitchen.

Vasavada, when asked why experts from Royal Veterinary College, London, were being called, almost echoed the statement. "We are leaving nothing to chance. Let nobody say later that in a moment of crisis we failed to exhaust all our options," he said with a straight face.

Vasavada said multiple causes could also be behind the swift elimination of the entire pride of lions. "Canine Distemper Virus, infighting, babesiosis protozoa. Any or all of these reasons could have caused the deaths. We are studying all the evidence before us," he added.

The forest department's failure to pin down the exact cause of the lions' deaths is the only certain outcome of the hectic maneuverings of the last few days. So far, nobody in the forest or government circles is even talking about a proper contingency plan in case things start taking a turn for the worse. After all, outside of Africa, these are for the last remaining wild lions in the world.

Maybe it's time to pick up and dust off the half-forgotten, over two decades old plan to shift at least some of the Gir lions to Madhya Pradesh. The move would substantially protect the gene pool of Asiatic lions, if not everyone's pride. 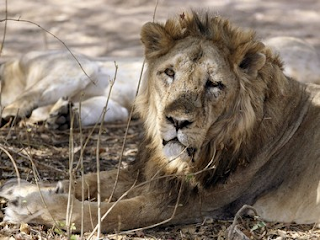 Posted by Kishore Kotecha at 6:19 PM