Meet the warriors who helped save the Asiatic lions of Gir

Meet the warriors who helped save the Asiatic lions of Gir

•Local volunteers have intensified efforts to protect the Gir icons.

GIR/AHMEDABAD: Their enthusiasm to volunteer is spurred by lion-hearted pride; they are dogged in their devotion to Gujarat's big cats and humbled by their responsibility to conserve the species. They are the common people of the state, members of communities whose work is vital for the survival of Asiatic lions in Gir. It is mainly their efforts which have led to the species being classed as 'endangered', from the earlier category of 'critically endangered', by the International Union for Conservation of Nature (IUCN).

These local volunteers have intensified efforts to protect the Gir icons from September-end, when canine distemper virus (CDV) and babesiosis began ravaging the lion population. So far, 23 lions have died. According to the May 2015 census, the state had 523 lions. However, in July this year, Gujarat CM Vijay Rupani had announced that the figure had touched 600; the number is yet to be confirmed by a formal count.

But for Babu Dhola, a trustee of Jab Gaushala in Gir, even an attrition of one is a horror. His vigilance in monitoring the well-being of a pride living near his village had revealed something amiss. Subsequently, he was the one who set off the first alarm about a disease outbreak hitting the lions. "On September 10, one of my employees spotted a weak lioness. I instructed my employees to keep a watch on the 29-member pride, who were the first victims of the viral epidemic. We had accompanied forest officials in their rescue missions. However, we could save only three," he says.

The bond that Gir villagers feel for the lions is exemplified by the sentiments of Lakha Gadhvi, the vice-president of the Gir Maldhari Samaj, a body of representatives from the pastoral communities here. "The lions rule this land and are its first inhabitants. They have rights over our cattle. They are part of our family and we exist because of them," he says. Gadhvi and hundreds of pastoralists had gathered in Visavadar for a 'besna' (mourning) organised in memory of the 23 dead lions. "More than half of our community members never claim compensation when their cattle are eaten by lions. Our people are rarely attacked by lions," he says. The crisis in Gir drove two medical practitioners, Purvesh Kacha and Jalpan Rupapara, 100km from their home in Amreli to Sasan, where they are assisting the forest department in removing misconceptions about CDV. 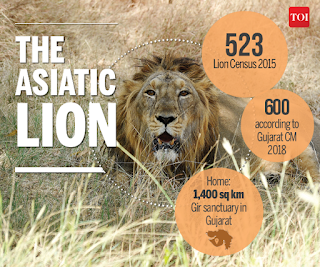 Posted by Kishore Kotecha at 12:53 PM