A two-member team from the Ministry of Forest and Environment (MoEF) that was in Gujarat to look into the cause of death of 11 lions in eight days in Gir has asked the state forest department to send samples of the dead animals to the National Institute of Virology (NIV) in Pune and National Institute of High Security Animal Disease, Bhopal so as to ascertain the exact cause of death.

The team comprising of Rajaram Singh, AIG, National Tiger Conservation Authority and R Gopinath, joint director (Wildlife) has also advised the state to go for the screening of the 45 lions in the range to look for latent infections if any.

Environment minister Ganpat Vasava said that the 45 animals in the range where the incident happened will be screened. ' "The team visited Gujarat at the request of the state government. As per their advice, we will also be screening the lions in the range," said Vasava.

"If it is found that they are suffering from any infection vaccination if needed will also be given," said Vasava.

A high-level official in know of the visit said that sending the viscera samples to Pune and Bhopal will let us know the exact cause of death. "The officials have also suggested the implementation of the protocol for screening of animals to know of any disease and pathogens in the affected range. Initially, the animals will be observed and if needed their saliva samples, blood samples etc will be collected to check for infection," said the officials.

The 11 lions, six of them cubs were found dead in Dalkhania range of Gir East in Amreli district. The government in a statement had said that the lions had died due to infighting and infections which could not be treated. 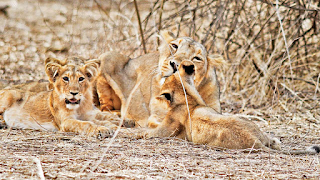 Posted by Kishore Kotecha at 6:54 PM