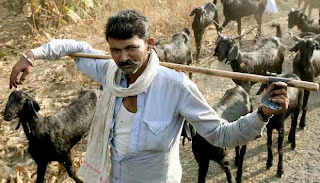 It is a rare, little-known conservation success story. Asian lions have shot up in numbers from a low 50 or fewer in the early 1900s to more than 400 today. For the last few decades, the 1,400 sq km Gir forest was known as the last refuge of a species that once ranged across north India, from the Punjab in the north, to Jharkhand in the east, to the Narmada river in the south, and as far west as northern Morocco and Greece. In India, lions were decimated by hunters. Their frequent roars gave away their location, the plains they inhabited provided convenient access, their social habits made bagging several at a time the norm, and firearms made it all easy.

In 1973, the Gir Lion Project relocated almost 600 resident Maldhari families and their livestock and banished hundreds of thousands of cattle that seasonally grazed in Gir. Easing the pressure from domestic animals allowed the vegetation to recover, and as a consequence, wild herbivores bounced back ten-fold. From living off cattle in the early days of the Project, the felines changed their diets to spotted deer, sambhar and nilgai. But several Maldhari families remain and livestock continue to use the forest as pasture.

Whether it is beef or venison, it makes no difference to a lion. However, the cats were chased away from cattle kills, so the owners could recoup some of their losses by selling the hide and meat. When more wild prey became available, the cats could fill their bellies, with no fear of losing their meal. And they proliferated. But they also continue to kill some livestock. That is inevitable when approximately 100,000 cattle, most belonging to people outside the reserve, continue to graze tantalizingly under the lions' noses in the forests every day. About 4% of the total livestock population is lost to these felines annually.

Lions have been living outside the forest for several decades as well, says lion expert Ravi Chellam. The conservation impetus has helped them reclaim a fraction of their past range by colonizing Girnar Wildlife Sanctuary to the northwest. The intervening 20 km is dotted by 122 villages, including Bilka, a town of 11,000 people, which apparently did not deter the lions. The cats have padded into the sandy coast about 20 to 30 km to the south, although at least 30 villages dot the distance to the beach. They are also settling into a smattering of small riparian forests to the northeast, 9 km away. And these large cats live in the intervening farmlands. In all, more than 100 lions, including young adults, prides, and older males, share the landscape of 6 million humans outside Gir. 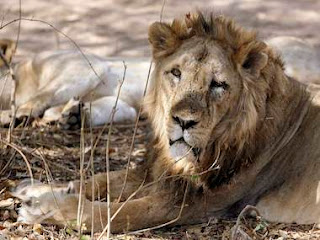 The surrounding farmlands were predominantly growing wheat in the 1960s and 70s, until irrigation made sugarcane cultivation possible in the 1980s. These have now given way to extensive orchards of mangoes meant for the export market, says Chellam. Tree cover with minimal human activity provides shelter and plenty of domestic animals offer sustenance. Large cats without any forests to call home will settle for much less. So clearly the challenge to conservation lies here, outside the protected Gir forests. Other predators too share this landscape; leopards dodge both, lions and people.

Lion researcher, Meena Venkataraman reasons that the cats are able to live outside the forest because of the plentiful livestock and the surprising tolerance of people. Although there are wild prey animals, like nilgai and boar, there are also thousands of cattle, a veritable smorgasbord on hoof.

Lions are fecund animals and, as long as Gir is well-protected, they will always be found in the surrounding landscape. Except for Girnar, the other forest areas are small; most are hardly large enough to accommodate one lion. It's likely that the cats will shelter in the woods during the day and hunt livestock in the surrounding villages at night. The only way to minimize the loss suffered by people is to help them secure their cattle, especially during the evening hours when hungry predators are on the prowl. Lack of prey will discourage the cats from settling down and getting comfortable.

Although people appreciate the Forest Department's prompt response in rescuing lions that have fallen into wells or removing ones that are particularly bothersome, they aren't impressed with the compensation scheme, which covers only a part of their cost for providing the lions' dinner, says Venkataraman.

Human residents within 5 km of the Park have lived with these felines for a long time. They have more complaints against wild herbivores eating their crops than lions taking their animals. One might wonder why the presence of a top predator does not control crop-raiding herbivores. That's because cattle are numerous and easier to kill than alert wild animals.

These felines were already venturing far afield in the mid-1980s when a severe drought killed thousands of livestock. After an initial period of feasting, the starving lions went on a spree of attacking humans. One lion was recorded 150 km away, near Rajkot. Since then, the relationship between the cats and people has been largely amicable. Clearly we need to understand what makes these villagers so tolerant of large predators in order to ensure that this conservation ethic does not become endangered.

Any change in land use, such as mining, industrialization, and crops, or even the weather, may tilt the balance against the cats, cautions Chellam. As more rural people aspire for urban lifestyles, they may become less tolerant of lions in the landscape.

Luckily, these cats generally seem to avoid attacking people and stay out of trouble. Compared to other large felines, or even their African cousins, the Gir lions are remarkably at home with people. After all, they have lived close to humans for at least 200 to 300 years. Chellam recalls African colleagues being amazed by how closely he could approach his study subjects without a rifle or any other weapon to protect himself.

With 100 lions living amiably among 6 million people, there is much that the rest of India and the world can learn about what makes this situation so remarkable.
Posted by Kishore Kotecha at 7:55 PM