New Delhi: The Supreme Court has said that the Central government's decision on reduction of eco-sensitive zone from 10-kilometres to 100 metres looks like a 'prima facie arbitrary' decision, with the court deciding to examine the validity of the Centre's policy.

In a statement having severe ramifications on residential and commercial projects across the country, the top court is questioning the government's move and while examining the validity, will specifically look into whether the Environment Ministry could have exercised such a power when pitted against environmental interest.

"Prima facie, it appears to us a completely arbitrary exercise of powers by the Ministry of Environment and Forest," said the top court in its stinging order.

On Friday, a bench led by Justice Madan B Lokur expressed surprise at the fact that the Central government, as a policy decision, has been approving proposals to reduce eco-sensitive zone from 10 km to 100 metres.

"It is extremely surprising that 10-km Eco-sensitive zone has been reduced by the Ministry of Environment and Forest to 100 meters."

"Since an order of this nature is capable of destroying national parks and wildlife sanctuaries in the country, we would like to examine the validity of this reduction," ordered the Court.

The bench, which was hearing a case, relating to environmental clearance to an industrial unit, within a 10-km radius of Dadar and Nagar Haveli Wildlife Sanctuary, questioned the intent of the Central government in protecting the wildlife in the country.

"Do you want to destroy everything? Wildlife, river, everything (sic)? You will have to explain how and why you did this and how do you propose to protect the environment now? Has the concept of 'protected areas' become irrelevant now?" the bench asked Additional Solicitor General ANS Nadkarni.

The Court tagged this case with a clutch of cases relating to environmental protection and is likely to take this up after four weeks.

The Central government had its own standard guidelines of having 10-km as eco-fragile zones around a protected area under the Wildlife Conservation Strategy 2002, which was later endorsed by the Supreme Court. The Court had directed that a 10-km limit was to be treated as the eco-sensitive zone until there is a notification by the Centre.

However, in the last two years, by a series of notifications, the Environment Ministry approved a reduction of eco-sensitive zone for a number of national parks and wildlife sanctuaries.

A reduction in eco-sensitive zone by the Ministry had rendered 59,400 apartments in Noida legal, which came within the 10-km radius of Okhla Bird Sanctuary.

A similar exercise is underway around Gir Forest in Gujarat and certain protected areas in Karnataka.

Environmentalists and wildlife activists alike have opposed this reduction, stating that the policy change will enable private parties to operate resorts adjacent to sanctuaries with ease, while allowing several other residential projects too. 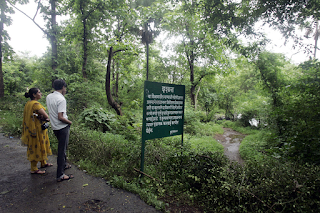 Posted by Kishore Kotecha at 1:09 PM