Gujarat's refusal to part with its Gir lions despite court orders has forced Madhya Pradesh to propose an alternative: source cubs and lions from zoos across the country for translocation to Kuno Palpur in Sheopur district. For more than two decades, the Gujarat government has scuttled the translocation conceived in the 1990s by the Central government, at the instance of the Wildlife Institute of India, to create a second home for Asiatic lions outside Gir.

In 2014, the Supreme Court threw out a curative petition by the Gujarat government, the last legal recourse available before it to stall the translocation, but the state has managed to avoid shifting, citing absence of one study or the other. The BJP government in Madhya Pradesh too hasn't shown much keenness in pushing for execution of the project.

Calling the new idea 'Plan B', Madhya Pradesh Chief Wildlife Warden Jitendra Agrawal told The Indian Express that a proposal has been sent to the Centre to allow the state to source cubs and lions from zoos. "It's a long-drawn process that will begin only after the Centre and experts give the go-ahead after recommending some studies," he said.

In May, Agrawal wrote to the state government, saying, "Despite an order from the Supreme Court and six meetings of the expert committee set up for the purpose, the chances of translocation of Asiatic lions are very dim in the near future."

He further wrote that cubs born in Indore zoo could be shifted to Kuno Palpur and kept in an enclosure with the permission of the Central Zoo Authority. This can be followed by sourcing cubs and lions from other zoos and a family could be established in Kuno Palpur, he added.

In the communication to the Centre, Madhya Pradesh cited its experience in releasing orphaned hand-reared tiger cubs in the wild, to bolster its case for shifting lions. In the past, Madhya Pradesh has shifted orphaned tiger cubs to other parks and trained them to hunt by developing their wild instincts gradually. "In the 1990s, we did not have such expertise, which we now have," Agrawal said.

But experts and activists are not sure of the Madhya Pradesh plan, and point out that it defeats the very purpose of the project, which was to ensure longevity of the Gir lions. "It's difficult to relocate zoo-bred lions in the wild. I don't think there is any precedent. It's in the best interest of Asiatic lions to have an alternative population outside Gir," noted wildlife conservationist Belinda Wright pointed out.

She also said that relocation of tiger cubs and zoo-bred lion cubs couldn't be compared. "They were born to mothers in the wild and reared in virtual isolation. Their genes were pure, unlike those of zoo-bred animals."

Wildlife activist Ajay Dubey slammed the MP government for "surrendering" before Gujarat and showing no political will to even get a judicial order executed. "Gujarat has no legal option left and yet it's delaying translocation. Even lions in Gir are vulnerable due to in-breeding. Getting zoo lions will defeat the very purpose of the project," he said. He also pointed out that hundreds of crores have been spent on creating infrastructure at Kuno Palpur, in relocating villagers outside the reserve, and in research and vaccination. 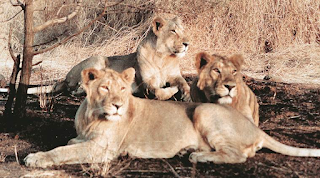 Posted by Kishore Kotecha at 12:34 PM