What happens when misplaced parochial pride comes in the way of saving an almost extinct species? The plan to set up a second home for Asiatic lions was first mooted during a conference in Vadodara in 1993. A quarter of a century later, nothing has happened on the ground. Soon after the 1993 conference, the Wildlife Institute of India (WII), Dehradun, conducted comprehensive studies at Darrah and Sitamata sanctuaries in Rajasthan and Palpur-Kuno sanctuary in Madhya Pradesh, before zeroing in on the latter. In 1997, the MP government began moving out villages within Palpur-Kuno. By 2001, 1,546 families from the 24 villages inhabited by the Sahariya scheduled tribe community had been moved out, creating an inviolate area of 1,250 sq. km in the form of the Kuno Wildlife Division in anticipation of the arrival of the lions.

However, Gujarat refused to share the lions, obfuscating the issue with numerous objections. Finally, in April 2013, the Supreme Court ruled that a few lions be shifted to Palpur-Kuno and the exercise be completed in six months. The Union ministry for environment and forests (MoEF) was asked to oversee the task and set up an expert committee for the purpose. Now, five-and-a-half years later, all that the MoEF has to show is an expert committee with members from the WII, NGOs and wildlife wings of Gujarat and MP.

More litigation followed after the 2013 verdict. The Gujarat government filed review and curative petitions, both of which were dismissed by the court.

WII experts have suggested moving 8-10 lions in the first batch to Palpur-Kuno and augmenting it with four lions every four years based on a review of the first translocation. Gujarat's objection to the transfer of lions on grounds that Kuno is unsafe sounds all the more baseless in light of the fact that 184 lions have died in the state -- as stated in the Gujarat assembly -- in the past two years due to electrocution, drowning and train hits.

So why haven't the lions been shifted? Gujarat's stand is clear, but MP's pursuance of the project at the political level has been half-hearted at best. CM Shivraj Singh Chouhan is on record questioning why his state is so keen to get lions when it is already blessed with tigers. At state wildlife board meetings, the CM's extreme disinterest is evident.

The CM's pusillanimous attitude seems to do with his boss Prime Minister Narendra Modi's stand on the issue: that he would fight tooth and nail to not share lions with MP. More than five years after the SC order, the MP government has not gone to the court citing contempt. It was left to a private citizen to do so. In 2014, MP-based wildlife activist Ajay Dubey filed a contempt petition that was finally disposed of in March 2018 after the MoEF told the court the process of implementing the court's order was in progress. "I will move a contempt petition again," says Dubey. "The Centre needs to stop thinking like the government of Gujarat and think as the government of India. The lion is a national heritage, narrow parochialism is the biggest threat it faces."

The biggest impediment now is the MoEF, which in many instances has supported the delaying tactics of Gujarat. "Gujarat wants a number of studies done before translocation, and some of these studies will take 20 years to do. These are nothing but delaying tactics," says Dr Y.V. Jhala of the WII.

Wildlife authorities in MP sound helpless. "Lion translocation is a central project. We have upgraded Kuno from a sanctuary to a national park. It is up to the MoEF to get the lions from Gujarat," says chief wildlife warden, MP, Shahbaz Ahmed. 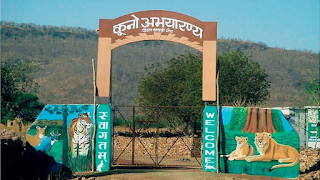 Posted by Kishore Kotecha at 4:36 PM