Our focus now is on saving the lions, cause of deaths will be investigated later: Chief Conservator of Forest of Junagadh wildlife

Our focus now is on saving the lions, cause of deaths will be investigated later: Chief Conservator of Forest of Junagadh wildlife

Chief Conservator of Forest of Junagadh wildlife circle, Dushyant Vasavada, says there were multiple reasons for the recent lion deaths. All measures have been put in place to contain the spread (of infection) to other areas in the Gir National Park, he asserted. About 140 teams consisting of 550 people had screened the entire forest area to ensure that lions were not at risk, Vasavada told Richa Sharma.

What is the situation so far?

Till now, 23 lions have died and the deaths have taken place in a particular area in Amreli district spread around 25 sq km. The lion population is spread over 22,000 sq km in Gir and this (affected) area is just 0.1 per cent of the park. It is purely a local problem and the moment we came to know, we picked up all live animals and put them in hospitals and rescue centre. Blood samples and tissues have been sent to various laboratories, including the Junagadh veterinary college, the forensic science laboratory at Hyderabad, IVRI Pune and the biotechnology lab at Gandhinagar.

Are there chances of a rise in casualties?

The dead animals belonged to a single pride of 26. Of the remaining three, two are critical. When the numbers increased, we called veterinary experts including retired doctors and experts from Rajkot and Vadodara zoo. A team of officials from Union Environment Ministry and experts from the Wildlife Institute of India also visited.

To check the spread in surrounding area, 31 lions were rescued and kept in animal care centre under observation. Their blood samples were tested and we found that they are absolutely healthy. We will keep them for some days until we are sure that they do not have any infection.

What are the reasons behind lion deaths at Gir?

The deaths have taken place due to multiple reasons and cannot be attributed to a single cause. Some deaths were due to infighting, which is a natural phenomenon among lions. Some died of viral, bacterial and protozoan infections and canine distemper virus. We will investigate how did these lions pick up the infections. But as of now, our entire focus and effort is on saving them.

As a precautionary measure for canine distemper virus, we have imported vaccines from the US and animals needing it will be vaccinated.

What safety measures have been put in place?

We constituted 140 teams consisting of 550 people and they screened the entire lion population of Gir and surrounding areas over eight-nine days and we did not find any signs of infection in other regions. Teams from the Indian Veterinary Research Institute-Bareilly, Delhi zoo and Etawah Lion Safari were also called as they had faced similar situations. They inspected the animals and collected samples and will be sending us reports. 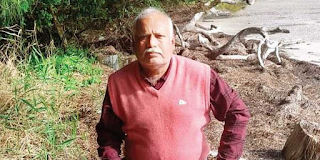 Posted by Kishore Kotecha at 2:09 PM