How Modi, Rupani want Gujarat to be exclusive abode of Asiatic lions

How Modi, Rupani want Gujarat to be exclusive abode of Asiatic lions

Economists are zoophobes, though they talk of animal spirits, as Manmohan Singh did while unleashing market reforms in 1992. Till the 1980s they knew only about bulls and bears; in the 1990s they learnt about Asian tigers, and then the Indian elephant.

They took note of the lion, which had been more deeply embedded in our cultural psyche than the bull, the bear, the tiger or the elephant, only after Narendra Modi began his reign with an MGM roar. Just like Asoka of Ahimsa got a lion capital on his Sarnath pole as the pillar of kingly dharma and Pax Mauryana, Modi got a greasy gear-and-spanner Gir lion as the mascot of his economic programme.

Modi has pretensions of being India's Henry the Lion, the duke of Saxony who tamed lions and slew dragons. But the Congress thinks that in four years he has become like England's Henry II, the Lion in Winter. Especially so, after his mane and name have been singed in the Rafale's afterburner.

The full-maned Asiatic lions, which have been prospering and procreating in Gir, are owner's pride and neighbour's envy to Gujaratis. Their state looks like a lion-head on the map, though the jealous scoff at it as a Lion's Club logo. The tiger may be the national animal, but Gujaratis are proud of being the exclusive hosts to the lion, the king of the jungle and by far a nobler beast.

Modi partakes of that pride. As chief minister he had resisted a Supreme Court order to shift a few of the Gir cats to Kuno-Palpur in Madhya Pradesh. The court was worried that if all the 600 stayed together on one turf, they would all be wiped out in a flood or a plague.

The fears seem to be coming true. The gamekeepers of Gir report that lions are dying at the rate of one a day due to protozoa infections and a canine distemper virus which had killed a third of East Africa's lions a few years ago. This has caused a hue and cry for shifting a few cats to safer zones, but Chief Minister Vijay Rupani would hear none of that.

Green dragons elsewhere may make a hue and cry, or a mew and roar, but for once Modi and Rupani are getting support from even Congressmen in Gujarat. Look at what arch foe Ahmed Patel has written to Modi—get more vets, build more lion dens and pull down tourist dens, enlarge Gir's buffer by 10km, and launch a Project Tiger-like programme. Not a word about lending or sending a few cats to MP.

Not without reason. Project Tiger may have been a roaring success, but with 50 tiger parks spread across India, the tiger has become another cat in the touristy wilderness, phone-shot by every selfie-taking teenager.

On the contrary, the lion, distant yet dignified, has always kept his aristocratic exclusivity. He was coveted, much more than the tiger, in royal and noble iconographies across cultures. Asoka had his four lions on his dharmic pillar, free India got them as its coat of arms. Thrones were called sinhasans; martial Rajputs called themselves Singhs; and the warrior-Guru Gobind urged his men to be Singhs.

Europe never had a lion from the Urals to the English Channel and beyond, yet several European royal and noble heraldries had the lion on their coats of arms. The English called their crusader-king a Lionheart; their royal coat of arms has been sporting three lions since 900 years; and Lady Britannia has one crouching beside her. The Jews have their Lions of Judah, a concept as old as the Book of Genesis. Closer home, Singapore derives its name from the lion, as do the Sinhalas.

The tiger was feared; the lion was coveted and revered. 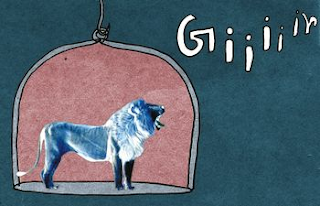 Posted by Kishore Kotecha at 4:47 PM