Ahmedabad: A video showing four men on two bikes chasing lions, lionesses and their cubs, and bullying them in Gujarat's Gir forest, has gone viral.

The video, which lasts less than a minute, has left wildlife lovers and activists furious.

In the video, most likely shot in Amreli area of Saurashtra region near the Gir Wildlife Sanctuary in Gujarat, lions are seen running frantically to escape the intruders.

The video has gone viral on the social media.

Forest officials have begun an inquiry into the incident and four persons have reportedly been arrested.

The Gir sanctuary is the world's only remaining natural habitat of popular Asiatic lions. 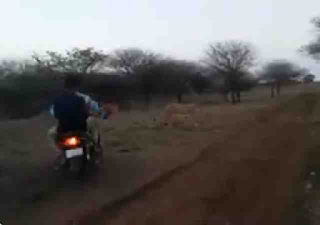 Posted by Kishore Kotecha at 7:10 PM