AHMEDABAD:  A video that shows a group of bikers chasing lions in Gujarat's Gir sanctuary has gone viral. The four men, three of whom, the police say, have been arrested, are seen chasing lions, lionesses and cubs. The license plate for one of the bikes can be seen. The lions run frantically to escape the interlopers. The video was posted on Facebook yesterday. Wildlife officials are trying to track down the fourth man and the source of the video. One biker, whose identity is yet to be disclosed, was arrested from near Rajkot earlier today. He was tracked down through the resgistration number of the bike and information from the local villagers. Later in the day, two others were arrested, one from Amreli and another from Rajkot.

The Gir sanctuary in western Gujarat is  the only natural habitat of Asiatic lions.  Asiatic lions -- different from African lions, with a characteristic fold of skin on their bellies and thinner manes on males -- once roamed most of Asia. The 1,400 sq km sanctuary has around 400 lions. But relentless development - roads through the forest, expanding villages and illegal mining - is forcing animal-human proximity.

While the animals frequently wander into local villages, there have been reports of deliberate chase and cruelty. In June, a 50-second video had surfaced  that showed a group of men in a car chasing a lion cub through the forest in Amreli district. In May last year, a four-year-old lion had accidentally fallen into dry well in the same area. While chasing the village's grazing buffaloes, it was surprised by a group of women. As the panic stricken animal tried to flee, it fell into the dry well. It was later rescued and released in the forest. 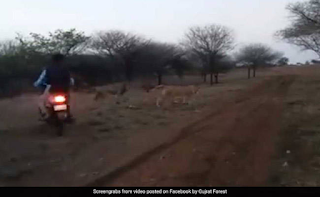 Posted by Kishore Kotecha at 6:25 PM