Three men were arrested on Thursday after a video showing motorcyclists chasing Asiatic lions in Gujarat's Gir Wildlife Sanctuary circulated online. Officials are trying to track down the fourth suspect, according to a NDTV report.

In the video posted on Facebook on Wednesday, the four men can be heard speaking in Gujarati as lions and lionesses frantically run.

Forest officials have initiated an inquiry into the incident and authorities are working on tracking the source of the video.

The registration number of a motorcycle visible on the video led the Gujarat Police to one biker who was arrested in Rajkot. Another biker was held in Rajkot later in the day while the third was arrested from Amreli.

The Gir sanctuary in western Gujarat is the only natural habitat of Asiatic lions in the world. The 1,400 sq km sanctuary and its surrounding areas Junagadh, Gir Somnath, Amreli and Bhavnagar districts are home to 523 Asiatic lions, according to the 2015 census by the state forest department.

In June, the Gujarat forest department had arrested four people for chasing a lion cub in their car in Visavadar taluka of Junagadh district located close to the Gir Wildlife Sanctuary.

Although none of the occupants of the car could be seen in the video, one of them is heard asking the driver in Gujarati to chase the cub: "Increase speed, hit it... go fast.. shoot it.. we will not get the chance again." Authorities, however, clarified that 'shoot' it meant capturing the chase on camera, and not shooting the cub with a gun. 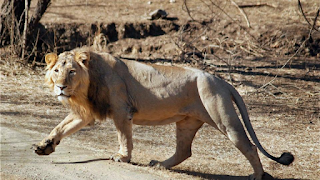 Posted by Kishore Kotecha at 6:35 PM