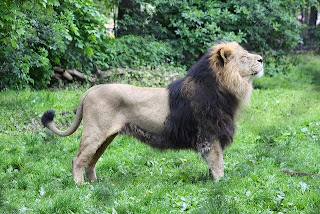 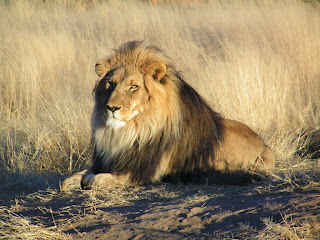 On August 10th, the world celebrates a creature many fear and/or associate with MGM.

This Sunday is World Lion Day, a reminder of the creature's importance worldwide. Lions have played symbolic roles all throughout history, but, with populations dwindling, the majestic beast's time of dominance is faltering.

But the lion starring in this World Lion Day ad isn't letting that get him down. As his handler, "The Lion Whisperer" Kevin Richardson, tries to create the video, he clowns around like nobody's business, talking — or shall we say, roaring — over him.

This hilarious interaction is just one of the reasons why it's so important that we all work to preserve the lion population.

To save the lions is to save our global heritage, according to the World Lion Day website.

The population numbers are staggering. In 1975, the lion population reached 250,000. Since then, the African lion has faced a 80 to 90 percent decrease in numbers, landing around 2,800 in total.

The Asiatic lion has seen much worse. Caught off guard by hunters, in 1907 only 14 members of this species were left roaming the Earth. Not until 1975, when hunting was declared illegal, did the Asiatic lion see numbers rise.

Today, 411 Asiatic lions exist. A far cry from a healthy population, but it certainly beats extinction. However, disease is carefully monitored by wildlife organizations, since their populations are so low. Just one sick lion would have a huge impact on the species.

But you can help by celebrating World Lion Day and raising awareness for the noble breed. Check it out to see if any events are near your neck of the woods!

There are numerous ways to celebrate and help save lion populations. There a plethora of organizations you can support if you want to help the lions. Check out the page on the World Lion Day website to see all of them. You can see that page by clicking the Action Box and remember to share this story to Become the News!

Posted by Kishore Kotecha at 4:46 PM