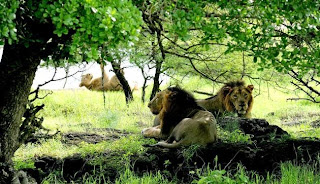 This August 10, 2014, photo shows lions at the Devaliya forest in Sasan Gir, Gujarat. The Supreme Court has dismissed a curative petition, filed by the Gujarat government, against shifting the lions to Kuno Palpur wildlife sanctuary in Madhya Pradesh. Photo: Special Arrangment

The Gujarat government has exhausted all legal options to prevent the translocation of lions from the Gir National Park after the Supreme Court dismissed a curative petition, filed by the State, against shifting the lions to Kuno Palpur wildlife sanctuary in Madhya Pradesh.

The Centre had proposed Kuno as an alternative home for the Asiatic lions as a conservation measure, in view of the risk of epidemics, since the lions are spread over a limited area in Gujarat. The Gujarat government approached the Supreme Court against the move. In April 2013, the apex court ruled in favour of translocation, directing a 12-member expert committee to implement its order in six months.

Gujarat then filed a curative petition this February which the apex court dismissed this week.

Posted by Kishore Kotecha at 4:56 PM