Now, teasing Gir lion can get you seven years’ imprisonment

Now, teasing Gir lion can get you seven years' imprisonment

Teasing or illegally attracting an Asiatic lion's attention at the Gir National Park and Sanctuary, the last abode of the big cat, can now attract punishment on the lines of poaching.

Stricter rules announced recently by the Gujarat government have prescribed seven years' imprisonment for offenders. The step was taken after authorities came across several instances of people offering bait in order to lure the endangered animal into the open for the benefit of tourists. "The new decisions were taken to provide a safety net for lions and ensure that they are conserved," said Gujarat forest minister Ganpat Vasava.

Other decisions included declaring an area of around 109 square kilometres in Amreli and Bhavnagar as a "conservation reserve". Of the 523 lions detected in the protected zone during the 2015 census, around 200 inhabit these two districts along the coastal route.

The Gir National Park and Sanctuary is spread over an area of 1,500 square kilometres.

The forest department will also institute a network of informers who will tip off the authorities on illegal activities such as filming of the Asiatic lion. Wildlife guards and drivers were found arranging for illegal sightings of the animal in peripheral areas of the national park in recent times.

The state government is also taking steps to enhance tourism at the Gir National Park and Sanctuary. Given the spike in visitor count, the forest department has decided to increase the number of permits from 30 to 50 during weekdays and 50 to 60 during weekends. Additionally, it plans to launch safaris in the area around Mount Girnar in Junagadh city. 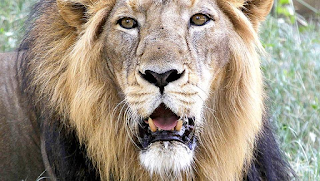 Posted by Kishore Kotecha at 5:24 PM