My social media timelines is always abuzz with short video clips of Asiatic lions sauntering through a village, people and livestock scampering around in awe and fear. Paradoxically, in some others, people barely peep out from their routine chores after making sure the "wild animal" is not in an unusually aggressive mood today.

There is a cottage industry in Saurashtra peninsula of Gujarat to make these clips "go viral" for entertainment. The Asiatic lion is not another domestic cat who roams the streets; it is a wild animal, surviving in its last abode in the Gir forests in Junagadh and now surrounding four other districts, of Gujarat. It is an endangered species protected under the Wildlife Act of India (1972).

In 1913, the population of Asiatic lions had dipped as low as 20. The last census in 2015 pegged the lion population at 523, and the chief minister recently said the population has since increased to 600. All of this is good news indeed. A spectacular success story of conservation by the Gujarat government and the people of Kathiawar (as Saurashtra is also known). But these growing numbers translate into a grim reality on the ground.

On Monday (March 5), the Gujarat government announced that 184 lions had died in the past two years - 2016 and 2017 - an average of 92 deaths. It is remarkably higher than 310 deaths recorded in the preceding five years - 62 deaths on an average per year. The break-up of these 184 deaths reveals 32 were caused due to unnatural reasons - meaning falling into an open well, getting hit by a train, or getting electrocuted by a live fence made by farmers to protect standing crop etc. Essentially, these are caused due to conflict with human habitation.

Earlier the lions were confined to the Gir forest and sanctuary area of 1,412sqkm in Junagadh. But the sanctuary exhausted its carrying capacity of 260 lions long ago. They have now spread out to Porbandar on the west and Bhavnagar and Amreli on the east. Foresters and politicians proudly boast of their conservation efforts of facilitating the lions to reclaim their lost territory.

It was indeed perhaps the lion territory where they used to roam free more than a century ago, but today, those "lost territories" are villages, farmland of great economic value and crowded urban agglomerates. National highways, high-speed railway tracks to major ports, temples and countless state highways are all a part of this "lion corridor".

In its defence, the forest department has termed pretty much most parts of Saurashtra as "Greater Gir Region". But this terminology means little to the lions, and even less to the villagers where the lions are pouring out into dense human habitation. This success story is now becoming its own nemesis and a ticking time bomb.

While there is indeed some resilience among people as they do not indulge in poaching, there is little patience when it comes to attack on on their livestock or humans and standing crop. There is absence of sufficient prey base outside the forest area, forcing the lions to attack livestock for food. Attack on humans are also aplenty, leading the forest department to send some 17 "man-eating" lions behind bars in captivity in 2016 after a series of fatal attacks.

On Monday, foresters waxed eloquent about how the numbers indicate a successful conservation story and that the death numbers in proportion to the growing population was only normal. But their helplessness was betrayed by a casual shrug when confronted with the number of unnatural deaths. "Isn't it inevitable now that they are almost cohabiting with humans," a senior officer said.

There is an urgent need to move some of the lions out of the Saurashtra region as much to allow for an independent population to evolve in a new ecosystem, as to now take the pressure off the peninsula's human habitation. The Supreme Court has already ruled on this.

In 2013, the apex court had directed for immediate transfer of a few lions to Kuno Palpur wildlife sanctuary in Madhya Pradesh that has been readied for the translocation, but nothing has moved as yet.

Politics is, of course, at the heart of this limbo, what with Narendra Modi, as Gujarat chief minister, having refused to part with a single lion as they are "Gujarat's pride". 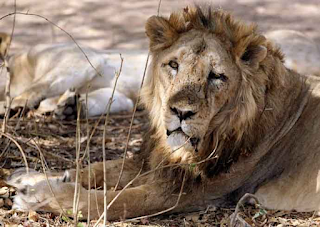 Posted by Kishore Kotecha at 11:18 AM