Gujarat, that prides itself on being the last abode of the majestic Asiatic lions in the world, lost almost 32 lions to "unnatural" deaths in the last two years. Other than these 32, 152 lions died of "natural" causes during the same period.

This was stated by minister for forests in Gujarat government Ganpat Vasava during the ongoing budget session of legislative Assembly. The minister said that of the 184 lions that died in the last two years in an around the Gir sanctuary, 104 died in 2016 and another 80 in 2017. Of these, 12 lions died due to unnatural causes in 2016 and another 20 in 2017.

As per the last census of lions conducted in 2015, there were 523 lions in the Gir sanctuary.

The minister said that the primary cause of unnatural deaths was lions falling into wells in the area, especially ones without parapet walls. There are 27 such open wells in Amerli district, which act as death traps for the animals. Several incidents of lions being mowed down by trains or vehicles too are often reported from the area.

"In order to prevent unnatural deaths of big cats, the state government constructed parapet walls on open wells situated in the revenue areas in the periphery of Gir sanctuary. Besides, fencing has been erected on both the sides of Surendranagar-Pipavav railway line passing near the sanctuary," the minister said in a written answer.

Meanwhile, the Gujarat Forest department formed a nine-member subcommittee headed by the principal chief conservator of forest to look into request of translocation of some Asiatic lions from Gir forest in Saurashtra region of Gujarat to Kuno-Palpur forest in the neighbouring Madhya Pradesh.

The Supreme Court had recently directed the state to form a 12-member committee for the smooth translocation of Asiatic lions to Madhya Pradesh, following Gujarat's concerns over the issue. Now this committee will have two subcommittees - one each in Gujarat and Madhya Pradesh - for a hassle-free translocation procedure. 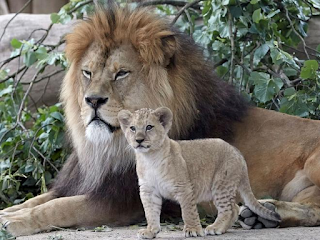 Posted by Kishore Kotecha at 12:37 PM