Rajkot: Having heard a SOS in the form of growl, the locals reacted and to their surprise located a young lioness helplessly looking upwards for rescue.

Yes, a young lioness after having strayed from the Gir forest on a village periphery in search of food, accidentally fell in a farm well of Amrapur village in Sutrapada Taluka in Gir Somnath district, early on Wednesday.

A senior forest official said that the lioness after having strayed from the confines of the reserve forest, somehow fell into the well that was at least 50-feet deep.

"It was only in the morning when the helpless lioness was spotted by the villagers after hearing some kind of moans from the feline," said the forest official.

He said that the villagers without wasting time, informed the local forest department who without promptly rushed to the village to rescue the lioness from the well.

"Only after over a two-hour-long operation, the lioness was rescued from the well," said the official.

It was immediatly shifted to the Sasan-Gir Animal Care Centre for treatment for injuries if any it may have suffered after the accidental fall.

After keeping the animal under strict observation at the animal care centre for the next couple of days, a decision would be taken regarding its release in the wild, said the forest official. 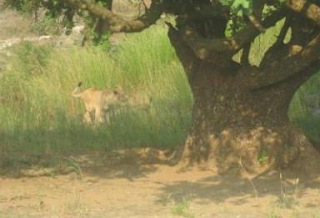 Posted by Kishore Kotecha at 7:26 PM