Some very brave forest department officials have rescued a lioness from a well at Gir Somnath district.

It surely went beyond the call of duty! Some very brave forest department officials have rescued a lioness from a well at Gir Somnath district. The Gir forest of Gujarat is famous for its population of lions that attract a huge number of tourists to see them closely. However, the day brought a nightmare for one of the lionesses of the forest as it fell into a deep well, as per an ABP News report. According to the report, the lioness may have come to the town during the night and fell into the well, which was over 80-feet deep and had water at a level of up to 20-feet. In the morning, the villagers heard the sound of the animal and looked around. To their shock, they found the lioness inside the well and called the forest department. The officials reached the spot and started rescue efforts. During the rescue operation that lasted for more than two hours, they brought a cage to confine the lioness. After the cage was ready, a forest department worker went inside the well in a cage meant for this purpose and tried to tie a rope around the lioness' neck. To everyone's surprise, not least his own, the official succeeded! It helped the others to pull the animal to safety, the report added.

The incident was reported days after a one-of-its-kind incident in which a resident of Lunasapur village in Amreli district of Gujarat delivered a baby in the vicinity of the Gir forest of Gujarat in an ambulance after midnight. Manguben Makwana reportedly gave birth to a baby boy with the vehicle surrounded by a group of 12 lions who reportedly emerged from the adjacent forest near the remote village. During the incident, which lasted for around 20 minutes, the staff of the '108' ambulance tackled the situation with courage and helped Makwana in giving birth, while the group of lions blocked the passage of the vehicle. 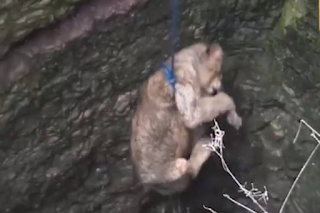 Posted by Kishore Kotecha at 7:35 PM