After video of the men allegedly chasing a sub-adult lion while driving in car went viral, forest department had initiated an inquiry and had found it to be genuine.

The five men arrested for allegedly chasing a lion while driving in a car were sent on one-day remand after forest department produced them in court in Visavadar town of Junagadh district on Thursday. Officers of Visavadar forest range in Gir (west) forest division produced the five in Visavadar on Thursday afternoon and sought their custody for further interrogation. The court granted the remand application and sent the five to forest departments' custody. "This is very serious offence and court has granted one-day remand of the accused. We suspect a few other persons were also involved in the incident and they too will be arrested in due course," Pradeep Singh, deputy conservator of forests (DCF) of Gir (west) said.

After video of the men allegedly chasing a sub-adult lion while driving in car went viral, forest department had initiated an inquiry and had found it to be genuine. Forest officers had identified the five men who chased the Asiatic lion in their car as Uttpal Pandya (33), Parthiv Trivedi (38), Devang Andharia (46), Brijesh Joshi (31)—all residents of Bhavnagar and Leela Ranaviya alias Lakhan Mer (20), a resident of Badak village in Visavadar taluka of Junagadh district. The five were detained on Wednesday afternoon. Forest officers had formally arrested them on Wednesday evening after booking them for hunting the Asiatic lion, an endangered species which has been classified as Schedule-I animal in The Indian Wildlife (Protection) Act, 1972. Forest officers say that the quartet from Bhavnagar were working as medical representatives (MRs).

"The Bhavnagar men had come to Kankai around two months ago for darshan and had accidentally met Ranaviya, a farmer. They had asked Ranaviya if lions could be seen in that area and Mer had promised to inform them whenever he would spot the big cats. On June 17, a bullock died in Ranaviya village and he spotted lions eating them late night. He informed the quartet of Bhavnagar.

But by the time, they arrived, lions had left the spot. Eventually, Ranaviya suggested to go towards Kankai Kunj near the border of the Gir National Park and Sanctuary (GNPS) saying they would probably locate lions there. And they did indeed find two male lions walking the stretch of road covered with hedge on both sides and started chasing the animals," Raju Vansh, range forest officer (RFO) of Visavadar said.

Forest officers said that the incident took place barely a few hundred metres away from the sanctuary of the GNPS. "They chased the sub-adult lion for about 500 metres before the carnivore managed to go off the approach road and escape in bushes. The accused were driving their car at the speed of around 40-km per hour," the RFO further said.

On Thursday, forest officers took the accused to Badak village and did a reconstruction of the incident. Gir forest and other protected areas spread in Junagadh, Gir Somnath, Amreli and Bhavnagar districts are the only natural habitat of Asiatic lions in the world. The 2015 lion census had put the population the top predator to 523. Hunting a lion can attract seven years imprisonment under The Indian Wildlife (Protection) Act, 1972. 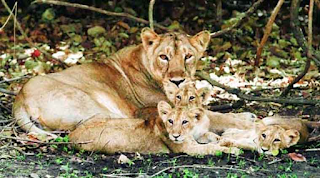 Posted by Kishore Kotecha at 3:39 PM