Pride in danger: World's last refuge for the Asiatic lion is under threat. Gujarat must act now

07-02-2015
Pride in danger: World's last refuge for the Asiatic lion is under threat. Gujarat must act now
Daily Mail
http://www.dailymail.co.uk/indiahome/indianews/article-2944096/Pride-danger-World-s-refuge-Asiatic-lion-threat-Gujarat-act-now.html#ixzz3RWjvaknA

Did the Gujarat government put the lives of its lions at stake by relocating the Maldharis, the traditional cattle-herders who lived in proximity to the Gir forest, in the name of protecting the region for the illustrious big cats?

At least the state forest department seems to believe so.

According to a senior forest officer who did not want to be named, the lions of Gir will not survive without the Maldharis.

"Both are essential and intrinsic to the forest ecosystem," says the officer.

A pride of lions relaxing at Sasan-Gir, Gujarat. The state forest department seems to believe relocating the Maldharis has put the lives of the lions at stake

Being cattle-herders, the animals which the Maldharis reared also acted as a source of food for the lions.

And since the community received adequate compensation from the state government for the lost livestock, the arrangement worked quite well for both the herder and the predator.

This changed once the government started moving out the families from the sanctuary in the name of conservation. The big cats have strayed into the neighbouring villages in the Saurashtra region desperately looking for prey (pictured: a body of a lion knocked down by a speeding train)

The process continued over the years and now there are just 300 families left.

This has forced the big cats to stray into the neighbouring villages in the Saurashtra region desperately looking for prey.

However, the dwindling number of Maldharis is not the only cause of concern for the lions.

Earlier this week the state forest department revealed that as many as 66 hotels and guesthouses have come up either within the buffer zone of the sanctuary or just bordering it, throwing all norms to the winds and thus creating hurdles in the sensitive lion corridor.

Shockingly, the government has started a "paying guest" facility to local farmers who could offer six rooms to tourists. 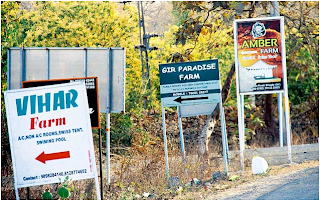 The so-called hospitality units have come up in the sanctuary's buffer zone in Junagadh, Amreli and Gir-Somnath districts.

The department which revealed the illegal activities, however, did not specify, in its affidavit before the high court, what actions it would take against such illegal dwellings.

The sanctuary and its buffer zone are now peppered with hoardings and signboards of hotels and guesthouses soliciting tourists.

It is estimated that within a six-km radius of Sasan-Gir forest there are nearly 100 hotels and guesthouses. 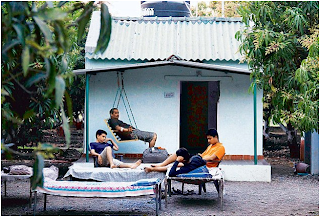 According to sources in the state forest department, a tourist resort run by a renowned hotel group in the area would now need to obtain a clearance from the Union Environment Ministry since its lease has expired.

The trauma of the lions, however, does not end here.

As many as 14 lions were killed in accidents alone last year due to transportation and mining-related activities taking place within the forest.

Apart from a railway line, as many as five state highways traverse through the forest, carrying a growing number of tourists whose number last year was 4.25 lakh.

Besides all this, there are three big temples with 23 shrines, which are also a big draw for the tourists and pilgrims.

Meanwhile, the lion population in the state has been rising steadily since 1968 when the numbers where less than 200 to the current 441, highlighting an urgent need for relocation.

Posted by Kishore Kotecha at 4:29 PM