Bhopal: An ambitious project to reintroduce cheetah in India in the forests of Madhya Pradesh has hit a roadblock for want of funds.

The country's last spotted feline died in Chhattisgarh in 1947. Later, the cheetah - the fastest land animal - was declared extinct in 1952.

"Madhya Pradesh forest department sought Rs 264 crore from the concerned departments in Delhi to import cheetah, that had become extinct in India, from Namibia to the state's Nauradehi Wildlife Sanctuary in December 2013, but we have not received any response yet," Principal Chief Conservator of Forest (Wildlife) Narendra Kumar told PTI on Friday.

"In a prelude to cheetah reintroduction, the Wildlife Institute of India (WII), Dehradun, tailored an action plan for Nauradehi in Sagar district and sent its initial blueprint of Rs 16.6 crore to us for execution in November 2013," he said.

According to WII, the MP forest department needs to reserve 700 sq km area for the imported cheetahs to dwell in the sanctuary, spread over 1,197 sq km, forest officials said.

Besides, 20 villages located in the 700 sq km area for cheetah project in Nauradehi need to be evacuated. A whopping Rs 264 crore would be needed to compensate around 2,640 families living in these villages, they said.

The Centre paid some money initially, but later on the state government chipped in and incurred the expenses for shifting villagers and preparing a habitat for Gir lions, that are yet to be introduced in Kuno-Palpur Wildlife Sanctuary, they said.

Kumar had sought finances from Ministry of Environment and Forests and NationalTiger Conservation Authority (NTCA) to kick-off the project.

Initially, the habitat for the fastest spotted animal was to be developed by shifting 20 villages from the sanctuary, building prey base, seven enclosures and fencing of 150 sq km area, Kumar said.

But no headway could be made due to non-availability of funds, he added.

The plan to reintroduce cheetah in India was conceived during the UPA-II government in 2010, under which Kuno-Palpur sanctuary, spread over an area of 344 sq km, was chosen for it, forest officials said.

Some progress was made in this direction. But on April 15, 2013, the Supreme Court, while hearing a petition, ordered that cheetah should not be trans-located in Kuno-Palpur where lions from Gujarat's Gir sanctuary are proposed to be shifted.

Following this, a meeting of Cheetah Task Force took place on May 23, 2013, which suggested that Nauradehi should be made the home of the spotted feline in India. Experts at the meeting suggested a scientific study of Nauradehi for trans-location of cheetah.

Nauradehi has been found most suitable for the cheetah given that its forests are not dense to restrict the fast movement of the spotted animal.

According to the action plan, around 20 cheetah were to be trans-located to Nauradehi from Namibia.

The Namibia Cheetah Conservation Fund (NCCF) had also given its nod to donate the fastest mammal to India after inspecting Nauradehi three years back.

However, MP was not ready to finance the project contending that it was the Centre's project. The MP government's past experience with the Central project's implementation in case of development habitat for Gujarat's Gir Lions in MP's Kuno-Palpur in Sheopur and Shivpuri districts of the state has not been satisfactory, officials said. 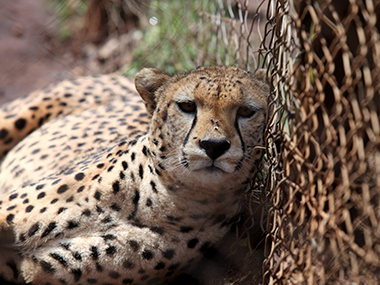 Cheetah's have been declared extinct in India since 1952. Reuters

Posted by Kishore Kotecha at 3:49 PM