Why dozens of India's Asiatic lions are dying 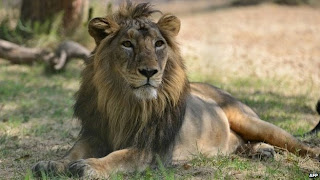 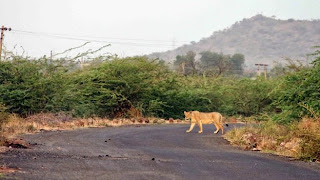 Is the last abode of the Asiatic lion turning into a death trap for the big cat?

Gir in India's Gujarat state is home to Asiatic lions and has seen 256 lions dying in the past five years.

Experts say their population is at risk with the big cats making new homes in human settlements.

Once widespread in Gujarat, the lion population shrank to a mere dozen in the early 20th Century, mainly due to hunting and drought.

But Nawab Mahabat Khanji of then Junagadh state, an animal lover who kept 300 dogs as pets, banned lion hunting, and was able to preserve the big cat.

However, in the last century as the lion population started soaring, the 1,400 sq km (540 sq miles) Gir sanctuary in Junagadh state began to be too small for the animals.

Today, lions are found across the 20,000 sq km area of the Saurashtra region - which includes Junagadh and 10 other districts - and are routinely spotted on private farms and near village homes.

Environmentalist Takhubhai Sansur says in the last three months alone, about 20 lions have been run over by speeding trucks and trains.

"Lion numbers have increased, but the challenge is their safety. About 40% of the total lion population now lives outside the forest area. Open wells and live wires on farms, poachers and passing trains and trucks have turned this region into a death field for the Asiatic lion," he says.

The International Union for Conservation of Nature (IUCN) had in 2000 added the Asiatic lion to the list of critically endangered species.

In 2005, when the lion population started swelling and crossed 250, it was removed from the list. Gujarat government's last lion census in 2010 pegs their numbers at 411.

Gir forest official Sandeep Kumar does not see the many deaths as a major threat to the species.

"Only 20% are accidental deaths, which is a cause for concern but the situation is under control. Lions are territorial animals and they live in prides. They are moving out as a male needs an area of 50 sq km and a female needs 26 sq km."

Increasingly, big cats are found straying outside of the forest area, appearing on farms and near homes

Mr Kumar says the government is now creating alternative habitats in Saurashtra to give more space to the big cat. Officials have also asked the railways to reduce train speed in lion-dominated areas to avoid running them over.

But critics say the amount is less than 5% of what is spent on promoting tourism, for which lions are the biggest draw. They also accuse the government of not being honest about the reason behind the lions' deaths.

"The deaths are alarming and that's the reason the government continues to hide the autopsy reports. Life of big cats outside of Gir is at great risk," says wildlife activist Harish Joshi.

Wildlife scientist Ravi Chellam, who has been working with lions for the past three decades, believes India's lion population is now at risk.

In the 1990s, in a study for the Wildlife Institute of India he suggested that a few lions should be shifted outside Gujarat to save the species.

"An epidemic in Serengeti National Park in Tanzania in 1994 killed over 1,000 lions in a few days. Something of that sort can't be ruled out in Saurashtra, as a sizeable population lives outside the forest and is exposed to infections.

"Indian courts and other experts have agreed on translocation, but Gujarat government is not comfortable with the idea," says Mr Chellam, who is part of a panel appointed after a Supreme Court order to oversee the translocation.

Activists accuse the state government of "playing politics" over lions.

The Gujarat government, under then chief minister Narendra Modi who is now prime minister, fought long court battles to prevent the lions being moved to the Kuno Palpur Sanctuary in Madhya Pradesh in central India.

For people of Saurashtra, lions are a symbol of pride and many have adopted second names like Sinh and Savaj, which mean lion in Gujarati.

"Mr Modi exploited the translocation issue for votes in Gujarat. But those who love lions want it to be safe and would never object to translocation. After all, they are not state property," says wildlife activist Bhikhabhai Jethava.

"The rampant illegal sand and limestone mining in the region have dried the rivers and that's the reason lions are migrating to coastal areas as far as 300km [186 miles] from the forest area," he adds.

Activists are also worried over the increasing man-animal conflict in the region - in the past two years, lions have killed 14 people and wounded 114 others. And two farmers have been arrested for killing lions who strayed into their fields.

The bulk of the government budget for the big cat today is spent on compensating farmers whose cattle have been killed by lions and on removing the big cats from farms. Last year, lions killed 600 cattle and 500 operations were carried out to relocated the big cats.

Gir forest official Anshuman Sharma says they now have to provide security to farmers to harvest crops as they fear prowling lions and leopards.

"Wildlife management has now become more of human management. We have to work round the clock to ensure human life doesn't get affected as it's only due to the local people here that the lion population has survived," Mr Sharma says.

State forest officials say lions can be safe only in Gujarat, a view the state government has been pushing.

RL Meena, chief conservator of forests, rubbishes suggestions that the lion may become extinct in Gir.

"There has been no incident ever when a local has knowingly killed a lion," he says.

"People are mostly vegetarian here so there is no dearth of bush meat for the big cat."

The big question, however, still remains - are India's lions really safe?
Posted by Kishore Kotecha at 12:13 AM