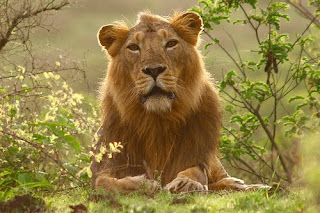 Gir National Park has registered record increase in tourist arrivals for a year. Gir welcomed 271,000 tourists during April 2010 to March 2011, an increase of 32 per cent.

This is the best ever year for the Gir National Park the only home of Asian Lions in the world. Foreign tourist arrivals to the park also increased by 19 per cent in the year.

According to local tour operators and hotel owners, tourist rush during the festivals has increased in last year. The main reason behind it is the decision by Gujarat government to increase daily permits during around festivals to 150.

Posted by Kishore Kotecha at 3:06 PM