For a sustainable forest management 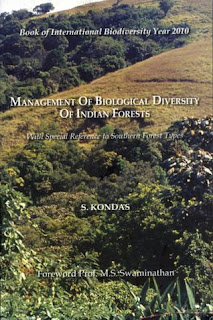 This book by Kondas is a fine exposition of the basics of forestry and principles of tropical forest ecosystem management, with special reference to south India. A forester with four decades of field experience, he connects theory with practice easily and, in the process, brings out the essence of sustainable forest management. The work is thus a welcome departure from the usual tomes of emotive green outpouring.

First, the reader is taken through the physiographic conditions of peninsular India, its forest types, the definitions of terms one comes across frequently in any debate on forestry and conservation, and the state of the forests and other biodiversity-rich sites such as the wetlands. The treatment is quite exhaustive, and the history of forest management is traced right from the British days. Also, the legal framework governing forest and wildlife management is well presented.
Influences

Having set the stage, Kondas goes on to examine the impact of various influences — positive and negative, natural and human — on forest biodiversity. The analysis covers the effects of climate change, introduction of exotic species, construction of reservoirs and other forms of human interference, and even of well-intentioned enactments and schemes for vegetation and wildlife protection. Notably, there is no attempt to underplay or exaggerate the impact, good or bad. For instance, talking of climate change, the author — far from projecting a doomsday scenario — lays emphasis on recognising its inevitability and evolving strategies for adaptation. He draws particular attention to the resilience of ecosystems to change and their capacity to strike a new state of equilibrium — a point made forcefully by none other than James Lovelock.

Kondas has some interesting things to say about some of the initiatives taken in India and elsewhere to protect the health of ecosystems. If the efforts to bring the tiger back to the Sariska sanctuary, where it once flourished, met with only a partial success, it was because the factors that were responsible for the tigers' disappearance in the first place — poaching and the congregation of pilgrims — continued to exist. The proposal to find a second home for the Asiatic Lion in northern Madhya Pradesh met with stiff resistance from the Gujarat government and the project had to be abandoned.

There is a lesson for those who vociferously oppose any kind of human interference with natural ecosystems in the name of environmental protection. Kondas cites the example of the Amaravathy in Tamil Nadu that teems with crocodiles today, thanks to the construction of a reservoir and the accumulation of silt which provides an excellent spawning ground for them. So too, the elephant population at Parambikulam-Aliyar that was disturbed by the construction of a hydroelectric project in the 1960s returned to its original state by the 1990s. To give an example from outside India, the return of wildlife to south Sudan, a country ridden by prolonged civil strife, buttresses the view that Nature, somehow, fights back to claim its due place under the sun.
Exotics

On introducing exotics, a practice shunned by the not-so-well informed in this country, the book offers several illustrations to show that it need not always be harmful. It could, on the other hand, be beneficial. For instance, Casuarina equisetifolia, introduced in the erstwhile Madras Presidency in the 19{+t}{+h} century, was an unqualified success. Similarly, the three varieties of Eucalyptus, wherever introduced, have done better than the native species.

No study of India's forests would be complete without reference to the dedicated work of its forest personnel during the last 150 years, and Kondas is certainly not found wanting on this count. Who can remain unimpressed by the contributions of foresters like Dietrich Brandeis or Champion or Seth or Gamble? The work of Sir William Hooker and Robert Wight, botanists, has come for special mention. What is striking is the absence of any reference to the National Forestry Action Programme (NFAP). The NFAP is an ambitious, hugely funded project of the Union Ministry of Environment and Forests that is aimed at enlarging the country's green cover, and, as such, it warranted a critical appraisal by the author. The omission is glaring in this otherwise commendable work that will be found useful especially by practising foresters and members of the NGOs committed to the cause of nature conservation.

Posted by Kishore Kotecha at 10:06 PM