When a video of locals harassing a lioness with a bait in the unprotected areas of Sasan at Gujarat's Gir went viral recently, social media lit up with outrage.

The Gujarat High Court had already pulled up the state government in March over poor measures to save Asiatic Lions – the pride of Gujarat, and of India – after reports of 184 deaths recorded between 2016 and 2017 were made public.

As many as 32 had perished due to unnatural causes, such as lions falling into open wells, electrocution by barbed wires, and road and rail accidents. The PIL is still being heard in the HC.

As the backlash of the viral video rattled the state government, they pulled out an "affirmative action" plan to silence their critics.

There are over 523 lions living in Gujarat as per the 2015 census. Three years on, the number could be well over 600, according to some wildlife experts. One of the major issues that the lion conservation movement in Gujarat faces, is that around 54.6 percent lions live outside the protected areas of the wildlife sanctuary.

As a result, lion and human interactions are at an all-time high, with videos of locals riding bikes in the lions' vicinity or tourists chasing them around in vehicles disturbing the feline's ecology making it to social media frequently.

One of the solutions that conservationists swear by is translocation of lions to new territory outside Gujarat.

Gujarat Not Keen on Inter-State Translocation?

Five years on, the Gujarat government claims that lions will be translocated, but under the International Union for Conservation of Nature (IUCN) guidelines. These guidelines state that 33 studies need to be conducted before translocation is undertaken.

When The Quint asked the Principal Chief Conservator of Forest GK Sinha by when the translocation process will be completed, he passed the buck on to the Centre, and said only they will be able to reply.

Now, the state government is keen on moving lions to newer sanctuaries within the state.

By when? He did not respond.

Ravi Chellam, who is a member of an expert committee formed by the Ministry of Environment, Forest and Climate Change (MoEF & CC) based on the SC Order to implement translocation pointedly said it is the complete unwillingness of the governments to deal with the complexity and urgency of the problem.

The Quint Spoke to Madhya Pradesh-based wildlife activists Ajay Shankar Dubey who had filed the contempt Petition in Supreme Court in 2014. "If they want to translocate lions within the state, why has that step not been taken, what has stopped the Gujarat government so far? Do we respect the SC order or not? Because it was supposed to be implemented in six months' time after the order was issued, and now five years down the line, and we are still talking about translocation," he added. 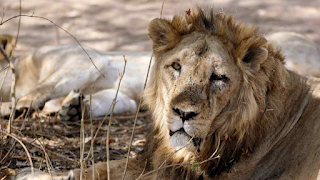 Posted by Kishore Kotecha at 3:28 PM