Asiatic lions are an endangered species and enjoy highest legal protection by virtue of them having been included in Schedule-I of Wildlife (Protection) Act, 1972.

A carcass of an Asiatic lion was found floating in Shetrunji river near Bhandariya village in Talaja taluka of Bhavnagar district on Wednesday, with forest officers saying the cause of death was a matter of investigation.

Forest officer of Bhavnagar forest division said they received information that a carcass of a lion was floating in Shetrunji river in Bhandariya village at around 10 am. "It was a male lion aged between 10 and 12 years. Its carcass was found floating in Shetrunji river upstream the Shetrunji dam. There were no apparent outer injury marks and cause of its death will be known after we receive post-mortem report from veterinarians," assistant conservator of forests of Bhavnagar, Vijay Rathod told The Indian Express.

Asiatic lions are an endangered species and enjoy highest legal protection by virtue of them having been included in Schedule-I of Wildlife (Protection) Act, 1972. The only sub-population of this big cats is surviving in Gir forest and other protected forest areas spread over Junagadh, Gir Somnath, Amreli and Bhavnagar districts of Saurashtra region of Gujarat. These are the only wild lions in the world outside Africa.

The range of Asiatic lions was once reduced to just Gir forest in Junagadh, Gir Somnath and Amreli districts only. But thanks to conservation efforts of Gujarat state forest department and support from local communities, the population of these big carnivores has recovered over the last 40 years.

With a growth in their population, lions started reclaiming their territory and have extended their range up to Bhavnagar district along the bank of Shetrunji river over the last decade.

Wild Asiatic lions live up to around 14 years. Forest officers said that a 10-year-old lion is considered an old lion. "However, the cause of the death of this lion is a matter of investigation," added Rathod.

The incident comes five days after carcasses of 10 blue bulls and an Asiatic lion were found floating in a well on an agricultural field in Likhala village of Savarkundla taluka of neighbouring Amreli district.

Forest officers in Amreli have prima facie concluded that the male lion, which was around four-years-old, had been dumped it to the well after it had been electrocuted while the blue bulls, locally called nilgai, had died after consuming water spiked with urea.

Blue bulls, spotted deers, Indian gazelles, sambars and wild boars — ungulates which are found in plenty in the lion landscape in the four districts — raid standing crops, especially at night. To keep these herbivores at bay, some farmers erect live wires around their field. However, sometimes lions also come in contact with such wires and get electrocuted. A lion was electrocuted after coming in contact with a live electric wire in Vaghnagar village of Mahuva taluka in Bhavnagar district in 2014. 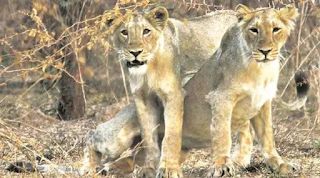 Posted by Kishore Kotecha at 11:38 AM