I love lions. I love to watch them," declared a farmer I was interviewing in Dalkhaniya village in Gujarat's Amreli district as part of my social survey in the agrarian landscape outside the Gir Protected Area (PA). I found myself beaming at him and concluded that this reflected a remarkable local acceptance and love for lions.

But he continued: "…in the forest, that is. But in the farm, I prefer to see oxen." After a surprised pause, my colleagues and I burst out laughing. We understood what he was trying to say — "We love lions but prefer them to be restricted to the forest."

My research over 15 years has been all about deciphering the dynamics of the remarkable coexistence of wildlife and people in this farm-habitation-forest matrix — the fears, the concerns, the humour that mark people's perceptions of predators in their midst. But I am also acutely aware of how delicate this balance in the coexistence is, and how easily the scales can tip, endangering an entire species.

Gir and its environs are the last wild refuges of the endangered Asiatic lion. The remarkable growth in the lion population in this landscape — from about 300 in 1995 to over 500 in 2015 — points to the success of conservation management over decades. In 2015-2016, Gujarat celebrated the Golden Jubilee of conservation management of the Asiatic lion — it had been 50 years since Gir was declared a protected area in 1965.

Over the last 25 years or so, a notable trend in lion distribution has been recorded in the area: the animals, their numbers up, are venturing far out of the protected area and have come to live in a staggering range of habitats — hilly tracts, coasts, pastures and farmlands.

While the growing population and the habitat expansion are great news for lion conservation, they have also brought lions closer to people outside the PA. This also means there are more incidents of livestock depredation and of attacks on people by lions. Reports of lions dying due to unnatural causes — railway and road accidents, electrocution, drowning in open wells and from the occasional cases of carcass poisoning — are also causing alarm. And so, safeguarding lions and people outside the PA has lately become a challenge for the forest department.

The lion's dispersal has also resulted in another disturbing phenomenon: a huge increase in unregulated wildlife tourism around the protected area. Videos of tourists on bikes and cars chasing lions over several kilometres at night have been widely shared on social media. The more affluent of these 'wildlife enthusiasts' are willing to pay up to ₹20,000 to see lions. "They are after all safe in their vehicles. It is very different for people like us who often have to walk alone in these parts with just a torch in our hand. We can't feel the same enthusiasm," said a resident of Malshika village in Amreli district. The village residents I speak to often say that this kind of brazen tourism affects the largely harmonious dynamic between the villagers and big cats, making the animals more irritable and aggressive.

Temple at the core

The increasing number of visitors each year is just a small part of the problem: the boom in wildlife and religious tourism in the area is changing the landscape by catalysing urbanisation, altering land-use, and changing the profile and influence of stakeholders.

Meanwhile, the State government in 2017 permitted night-stays at the Kankai temple located in the core area of the Gir National Park, despite concerns from wildlife experts. Although the permission comes with regulations, the visitors who slip in through this new loophole will mostly belong to the 'eco-tourism' category. The consequence would be increased night-time traffic, noise and disturbance to wildlife by people visiting the temple. This, despite the fact that the proposal had been opposed tooth and nail for over 20 years or more.

Another worrying proposal is the State government's plan to reduce the eco-sensitive zone around Gir. An eco-sensitive zone, as per the environment ministry guidelines, can extend to 10 km around a PA. Here certain development activities are prohibited. As for Gir, the eco-sensitive zone could be reduced to less than 1 km in certain areas, opening these parts to mining and tourism. Both the night-time permits to the Kankai temple and the delineation of eco-sensitive zones are being challenged through PILs and are being examined by the judiciary.

There is yet another recent development that is sure to cause changes in the landscape in the form of habitat loss, land degradation through roads, resorts, traffic and pollution: the clearance for the Ambardi interpretation zone, essentially a safari park where tourists can drive around to see captive lions in enclosed natural environments. This interpretation zone is just 15 km from the protected area.

The future of a healthy lion population calls for a rollback on a lot of decisions taken in recent times, whether related to delineating eco-sensitive zones, promoting tourism or yielding to the demands of powerful lobby groups. We must remember that the agro-pastoral landscape around the sanctuary is as important as dedicated management, political will, people's tolerance and the lion's resilience in contributing to the success of Asiatic lion conservation. Preserving this entire matrix will determine whether there will be another milestone jubilee celebration in the future.

The author is a wildlife biologist who has been involved with research on the Asiatic lion for over 15 years. 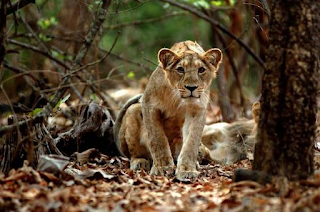 Posted by Kishore Kotecha at 1:22 PM