A CREATURE SO FEARLESS IT sends lions running for their lives: the cow. On a quiet Tuesday evening, a pride of rare Asiatic lions strolled through the village of Rampar, in the Indian state of Gujarat. They were likely looking for cattle to munch on, NDTV reported, but seem to have bitten off more than they could chew.

In CCTV footage, the lions prowl carefully around the lane, until a lone cow wanders meditatively into the frame. The lions take a single look at the approaching bovine, it seems, and scram! Rampar is 10 miles from the Gir Forest National Park and Wildlife Sanctuary, home to the world's last remaining population of Asiatic lions. The big cats are an occasional sight in Rampar and other local villages, where they've been known to attack humans and cows.

In Gir's 545 square miles, there are 650 Asiatic lions, according to a census taken this month. Though populations are increasing—in 2015, there were 523—the predator, which once prowled from central India all the way to the Middle East, is still extremely rare. They are slightly smaller than their African cousins, with more of a ruff than a mane, and a more tufted tail tassel. But the differences may run deeper than that: Attempts to crossbreed the subspecies in zoos the 1980s were unsuccessful, with many of the resulting offspring sickly and susceptible to disease.

As a total population, 650 lions is vanishingly small, but for Gir, it's proving rather a lot. As the park has succeeded in boosting their numbers, humans living on the fringes of it are coming into contact with the lions more and more. Some think relocation of some of the big cats might be the answer. Since 2004, Gujarat and neighboring state Madhya Pradesh have been fighting a bitter battle over the idea. The Palpur-Kuno Wildlife Sanctuary in Madhya Pradesh has been approved as a potential new home for about 40 lions to ease overcrowding and inbreeding, but Gujarat has been fighting the relocation. The state government has said that it will only permit the relocation if they receive 33 studies, as mandated by the International Union for Conservation of Nature, that all agree that Palpur-Kuno is a suitable new home.

This is as much a political and economic issue as a conservation one, however. Many Gujarati people think of the lions as a key part of their heritage (and tourism economy). Prime Minister Narendra Modi, who is from the state, referred to them as the unshareable "pride of Gujarat." But the relocation project seems to be inching forward. The cows of Madhya Pradesh had better ready themselves. 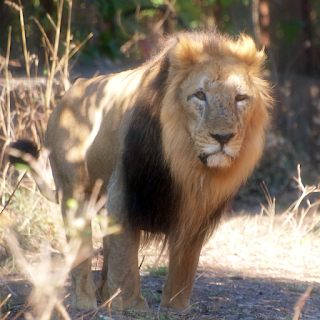 Posted by Kishore Kotecha at 4:23 PM