16-02-2015
Gujarat Big Cat's Roar to Get Louder as Modi Pitches for Project Lion in Budget
The New Indian Express
http://www.newindianexpress.com/nation/Gujarat-Big-Cats-Roar-to-Get-Louder-as-Modi-Pitches-for-Project-Lion-in-Budget/2015/02/16/article2670917.ece

NEW DELHI:The Asiatic lion's roar will soon get louder. On the directions of Prime Minister Narendra Modi, the Ministry of Environment and Forests (MoEF) is preparing to launch Project Lion on the lines of Project Tiger for the conservation of the jungle king. Financial support will be sought in the budget for the purpose.

Modi has taken up the task to kick-start the efforts through proposed Central funding. A concrete plan for the conservation of the lion that exists only in Gir Forest in Junagadh, Gujarat, across Asia has been demanded by conservationists for long. The last lion census by the Gujarat government in 2010 pegs their numbers at 411. 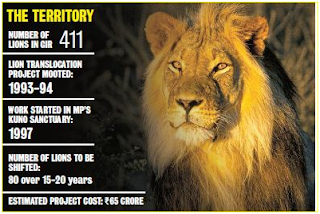 A note signed by S Kannan, economic advisor, MoEF, has been circulated to the divisional head of the wildlife department in the Ministry of Environment and Forests to come up with ideas for Project Lion, to be included in the detailed plan. According to a senior MoEF official, Project Lion is a priority.

"Conservation efforts are needed as lions are under threat and history shows that an epidemic in Serengeti National Park in Tanzania in 1994 wiped off all the lions in a few days. This can occur in Gujarat as high inbreeding and low genetic diversity could make them susceptible to epidemics, thereby threatening their existence," said the official.

The Asiatic lion was added to the list of critically endangered species in 2000 by the International Union for Conservation of Nature (IUCN) but was taken off in 2005 after their numbers increased to over 250.

However, the Supreme Court, based on a petition in 2013, has asked the MoEF to move 80 lions to Madhya Pradesh from Gujarat but nothing much seems to have moved so far with Gujarat unwilling to part with the lions known as the pride of the State.

A meeting of the expert committee on lion translocation constituted following the Supreme Court order was held on February 11, after almost 10 months, under the chairmanship of Vinod Ranjan, additional director general (ADG) Wildlife (MoEF) to take stock of the progress of the project. The 12-member committee has been asked to submit its views within a month.

"While the lion translocation project is moving at a slow pace with details still being worked out between Madhya Pradesh and Gujarat, the conservation efforts need to pick up. The Centre has now taken up the task to protect the lion through proposed Central funding for conservation, which will complement funds allocated by the Gujarat government," said the official.

Posted by Kishore Kotecha at 3:44 PM