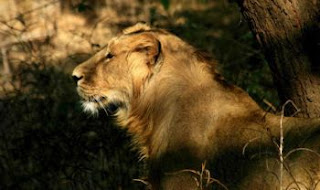 Natively from Junagadh but presently citizens of the United Kingdom, the Doshi family was on Friday in dense forest of Girnar that also has presence of lions and leopards. After high drama of over an hour, the family was traced.

The Doshi family was in Girnar forest to visit the Ashram of Kashmiri bapu. But on their way back they got on the wrong path and ultimately ended up getting lost in the jungle.

The family consisting of Bhartiben Lakhani, Husband Arvind Doshi and Son Bijal doshi was carrying mobile phone, through which they called their family. Their family informed MLA Mahendra Mashru about the incident.

As soon as the issue was reported to the forest department, the forest officers Kishore Dethadiya, Jhalabhai and Kuvadiyabhai started looking for the family in the parts of the jungle located around the path to Kashmiri Bapu Ashram. After a search for over 1 and a half hour the family was found and was brought back to the city.
Posted by Kishore Kotecha at 3:00 PM